skip to main | skip to sidebar

My friends from the NH and Central MA polymer clay guilds have been hard at work planning Klay Karma 09, our joint biennial Polymer Clay retreat.

visit the klay_karma Group at Yahoo.com for more information.

I had my first "real" introduction to Polymer clay at the first Klay Karma in 2005. Prior to that, I'd just been using PC to make molds and tearaway plates for my metal clay work. Someone at one of Celie Fago's keum boo classes suggested I check out KlayKarma to find out other things for do with PC, and what a great thing it was...I had no idea what I was getting into, but I walked into this big room and there was noise (talking, laughter, motors!), movement (women going from one table to another swapping ATC's) and colors! I sat next to Judy Dunn who patiently showed me the joys of skinner blends and introduced me to just about everyone. There were lots of folks there for CT, too- it turns out the So CT and NH-MA guilds trade off years, so every summer there's a great clay gathering in New England.

Nashua is just over the MA border and is famous for its shopping and vibrant crafts community- many artisans have studios in old brick mill buildings (Carol Babineau, who was recently named a Master Instructor for Art Clay World , has a wonderful studio in the Picker Building along the river) .

I'm looking forward to seeing many clay friends from all over New England in July - and now that the snow has finally melted from my back yard, I can actually believe that summer is just around the corner.... 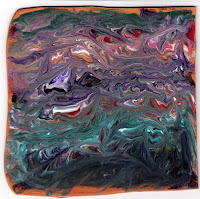 I like to have something new to show at a demo at the retreat and have been playing with mixing traditional oil paints with kato liquid clay and applying a marbling effect. Here's a sample of my first attempt at marbling with oils and kato liquid.
Posted by silverpolyglass at 5:00 AM No comments: